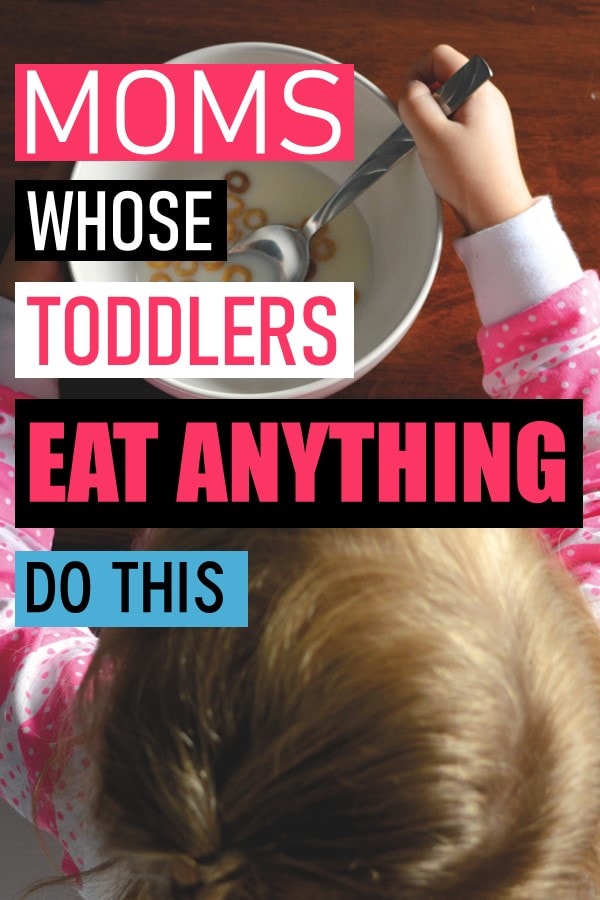 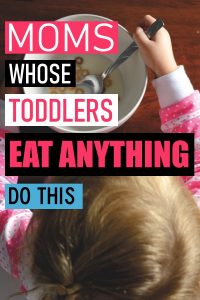 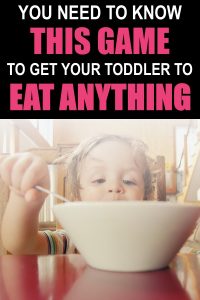 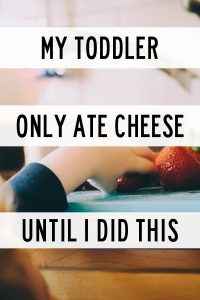 Two hit us hard. The moment my child turned two, I knew we were in for it. Not only did her temper tantrums get a whole lot worse, but she quit eating variety.

She went from being a happy baby willing to try anything to slowly but surely only being willing to eat dairy, breads, and packets.

Originally, I thought it was a phase that would fix itself but that didn’t seem to be the case. So, I started to work at finding the best ways to approach this. I wanted a way that wouldn’t backfire on me years later. I wanted her to enjoy trying new foods and eating. I didn’t want to force feed my child every single dinner.

And it turns out, there was a lot I could do and after implementing this, I had a toddler asking to try new foods within a week.

Disclaimer: Through no additional cost to you, I may be compensated from affiliate links included in this post. Learn more here.

By asking this question, you are just asking for a no. Also, they probably don’t like it. It takes at least 21 times of trying a food before you like it. Additionally, those baby packets, while they have vegetables in them, all taste like fruit so they don’t really count.

In a few points below, I will tell you what you should be asking, but for now rule number one is do not ask if they like it or any variation.

Stop asking “what do you want to eat?”

I used to always ask this. I got told that if you present kids with some options then they will eat what they need nutritionally. Kids are very good at listening to their bodies.

The big catch here is to present the options. By asking such an open-ended question, you are first setting yourself up for failure as in they get to pick what they eat. If they get to pick, then why would they want to suddenly want to eat what you decide. Second, they don’t even know what is available or what can be made for them.

While it is best to follow this rule for all meals, I think it’s most important for dinner. Everyone should always eat the same foods. For instance, if you have a stir fry, you can give your toddler a small serving of diced broccoli, a serving of rice, etc. Everyone is eating the same dinner but in different forms.

Your big goal here is that they see everyone doing the same thing. It becomes the norm for them.

Always include a “safe” food and a “new” food to the plate.

Additionally, you might even find that your child will try the new food item on their plate by themselves. But if that doesn’t happen don’t worry, these next few points will show you how to get them to try it.

Here is what I was missing. This simple, yet so smart idea completely changed my toddler to thinking that trying new foods was the most awesome thing to do. She now asks to play it.

So, what is it exactly? The problem with telling your kid to try foods is that it turns into a battle. Additionally, the goal is for them to like it and as I said above, they probably don’t like it. Now, we have a new goal. The goal is to decide what it tastes like?

Introduce the game at dinner time. Let’s say the new food is to try a piece of cucumber. Give everyone (parents included) a bite sized piece. So, peel it and dice it. By making it the size of one toddler bite, you increase your chances of them actually eating it (and not spitting it back out).

Now, before starting to eat dinner, say now we get to play the taste game. Have you and your other half be very excited. Explain that everyone is going to try the same new food (we are all going to try cucumber and decide what it tastes like). Have a parent go first. You just eat the food make funny faces and describe the taste (cold, kind of crunchy, sour, sweet, etc.). You can even make up tastes (it takes kind of purpley). The goal is to make this fun and silly.

Then ask who is next. Your toddler might decide they want to go next. Another tactic that you can use is when you ask who wants to go next? Have the other parent be all into wanting to go next. Then say, you have to wait your turn because it’s (toddler’s name) turn. This will make your toddler feel very special that it is their turn.

Additionally, this game gives them positive parent attention. You all watch and wait to see what they decide it tastes like. Feel free to even ask questions. Is it hot?

Before you know it, they will be eating and trying all kinds of foods.

It might seem like just a game but what you are actually doing is something that you probably do in other aspects of your parenting. With toddlers and little kids, a big part of parenting is helping them understand new experiences and the emotions that come along with it.

For instance, before we went to the dentist for the first time we read as many books as I could find about going to the dentist. We also played dentist with her stuffed animals. She got to be the dentist and check on their teeth. Beside it being a lot of pretend play fun, it helped her better prepare for the event. It wasn’t new to her.

This game is the same thing. It is the prep work to make them familiar with new foods. By playing the game yourself, you are showing her that everyone tries new foods. You are reacting in all types of ways by making funny faces. When kids try a food and aren’t too sure of the taste or texture, it is confusing when you are like see isn’t it yummy. I love broccoli. You are teaching them that the right response is whatever they feel, not they must smile and like it.

Stop “sneaking” food into their meals

First, my favorite way of adding vegetables to meals is through sauces and smoothies. I love to add carrots and spinach to smoothies. I also like to dice (small enough so my toddler can’t pick them out) peppers, carrots, and onions into pasta sauces. My newest favorite is to add pureed spinach and kale to pesto. Trader Joes actually has a pesto made with kale. It’s really good. We also make black bean dip and hummus in the food processor.

People love adding foods their toddler won’t eat in this fashion, but it won’t help you get them to eat or try the foods. Instead, you want to include them in cooking. You want them to see you add the carrot to the smoothie. Watch you add vegetables to the tomato sauce. Then they will see that the thing they love, like their smoothie or spaghetti, has these food items in it and maybe those food items aren’t so foreign and scary to try.

Start doing a no thank you bite

Similar to the taste game, the no thank you bite gets your child to try new foods one bite at a time. The more they try them the more they will like them.

When your child says they don’t like it without trying it, you follow up with “you have to try it to decide”. Have one bite and if you don’t want to eat it then just say no thank you.

While I haven’t found this to be as effective as the taste game, I know many parents who have made this work really well for them.

The best way for your child to love eating healthy foods is to see you eating them. If they watch you enjoy eating vegetables, then they are so much more inclined to eat them as well. This is one of the reasons I say that having everyone eat the same thing is important. It models for them that you like the same foods that they are eating. After all, they want to be like you.

Read books about it and play it out

Toddlers learn best through being able to learn about the process through multiple means. Read as many books as possible about trying new foods. My favorite is a Charlie and Lola book I will never not ever eat a tomato. Whenever we eat seaweed, we say it is mermaid foods.

We also try to play trying new foods in pretend play. For instance, when we play kitchen and restaurant I always ask my toddler to make me a new food because I want to try it. She then brings me some imaginary food and I say oh you brought me a carrot I then make a lot of funny faces and have her also try the imaginary food.

We joined a farm share where you pick up and you can also pick your own vegetables. My toddler loves helping with this. She likes to count how many carrots we put in the basket. She loves to pick berries and tomatoes. But the absolute best part of it all is that she is willing to try the food she picks. She wouldn’t eat a berry for me at home, but she gobbles them off the bush. It also allows her to see where food is actually from (the ground and not a store).

Our farm also always has flowers to pick and we bring them home and put them in a vase so we can have fresh flowers every week. My toddler absolutely loves it.

Keep at it and keep your emotions in check

The only way to make progress is to be consistent. It takes years of trying some foods for them to like it. However, I promise that if they keep trying these foods, then they will like them.

Remember to not get frustrated and keep your emotions in check. The more you react, the more they will fight. If you get mad when they won’t try a food, then they are now associating the whole process of eating a new food with it being scary. Try to remain neutral and not react.

Eating healthy is a skill that you build over a lifetime. I am still finding new ways to eat healthier. Remove the pressure and start getting your little one to enjoy new foods by turning it into a game. 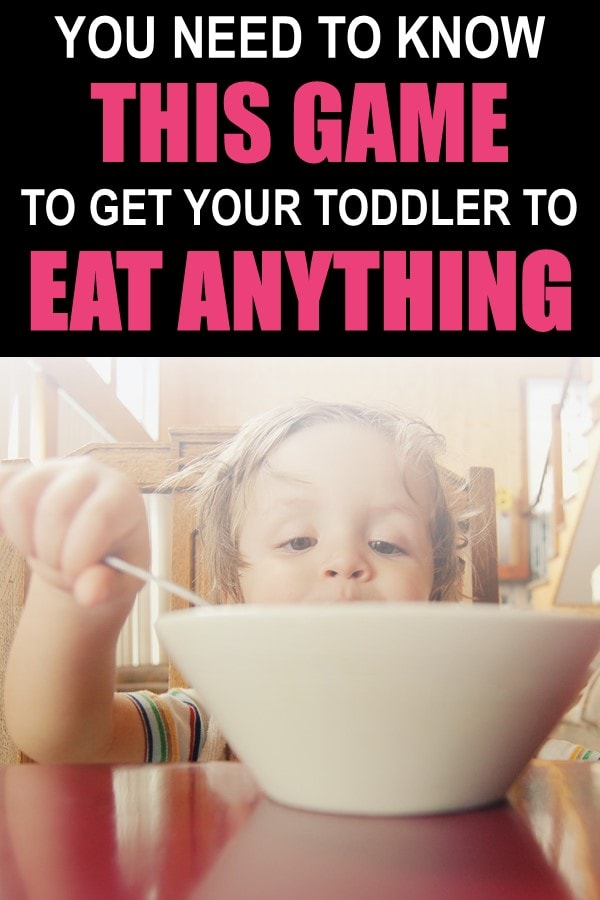 Hi! I’m Emilia and this is my blog dedicated to tips, opinions, tutorials and action items all geared towards helping you get the most out of motherhood. Here you will find parenting guides, where we exhaust a topic and give you all the details, mom life on anything from productivity and time management to self-care and personal growth, and mom unfiltered because what else do you want when making a decision than to talk it over with another mom to get their input. Not sure where to start? Check out our Reader Favorites page.